The clouds have parted, and I’m once again in the land of the living, and this cold is subsiding. This means I can taste and smell again, which has got me feeling really #blessed, just in time for National Pizza Week.

EXCEPT I DIDN’T KNOW IT WAS NATIONAL PIZZA WEEK, until it was half over. That’s okay though, because here, (to paraphrase a Grateful founding father) every week is pizza week and every day is a chance to be #365pizzagrateful (or #366pizzagrateful if we’re being specific to 2016).

No longer feeling like contagious zombies, this week we were able to make pizza night a social affair. Here’s how it went down:

Alexis: Heart still racing from witnessing the first QUADRUPLE overtime in University of Arizona history, we arrived at Humble Pie a little after 8pm on a Saturday night. There was a wait to be seated inside, so we opted for immediate outside seating, on the heated patio.

Scott: They really packed the tables into the dining room. It felt like a cafeteria.

Alexis: But with no rectangle slices to be seen anywhere on the menu. The menu was nicely organized. Starters, white pizzas, red pizzas, sandwiches and salads. The usual suspects in the starter section. We ordered the meatballs.

Alexis: And couple burgers. Weird to me that a pizza place would even have them on the menu.

Scott: Our waitress came and seemed to be in a rush, advising us to get our pizza orders in fast because the kitchen was backed up and it could take a while, so we hurried to give her our dinner orders at the same time we ordered the meatballs ($7.95).

Alexis: We did make her give her recommendations, before she pressured us into ordering. (We think based on her suggestions, she might not eat pork.)

Scott: She tipped us off on some of her favorite pizzas and also the most popular pizzas – there was no overlap between the two…I went with her favorite – the Chicken Parmesan humble pie.

Alexis: AP and I opted for a variety, so we could get a good sample of their offerings, choosing the Roasted Mushroom (white) and the Humble Pie Signature Sausage (red).

Scott: A few minutes later the appetizer came out – 3 meatballs and 2 pieces of bread. (The bread was ok. Sorry there wasn’t a piece for you too, Alexis. The kitchen was very busy and every piece of bread displaces a pizza that could be coming out of the oven.)

Alexis: It’s okay. These are just sacrifices one must make. Because apparently their oven was “pretty backed up”.

Scott: What did you think of the meatballs? I thought they were pretty tasty. I just noticed that the menu describes this appetizer as:

I don’t think I remember any parmesan being present, do you?

Alexis: Same. Very tender, and well seasoned. I can’t remember the parmesan, but photographic evidence tells a different story. (The cheese is sparse.)

Scott: That’s a great photo. That looks better than I remember them looking. I can’t say I blame your phone for dying after taking this photographic masterpiece. I’m sure even da Vinci was done for the day after painting the Mona Lisa.

Scott: These would end up being the highlight of Humble Pie for me. Although our waitress signaled it would be quite a wait for our pizzas, they came out just a few minutes later.

The chick-parm wasn’t the only pie to suffer this fate. Both the Roasted Mushroom and the Signature pie seemed just a minute or two undercooked. making the centers really flimsy and lacking a good crunch to the crust. 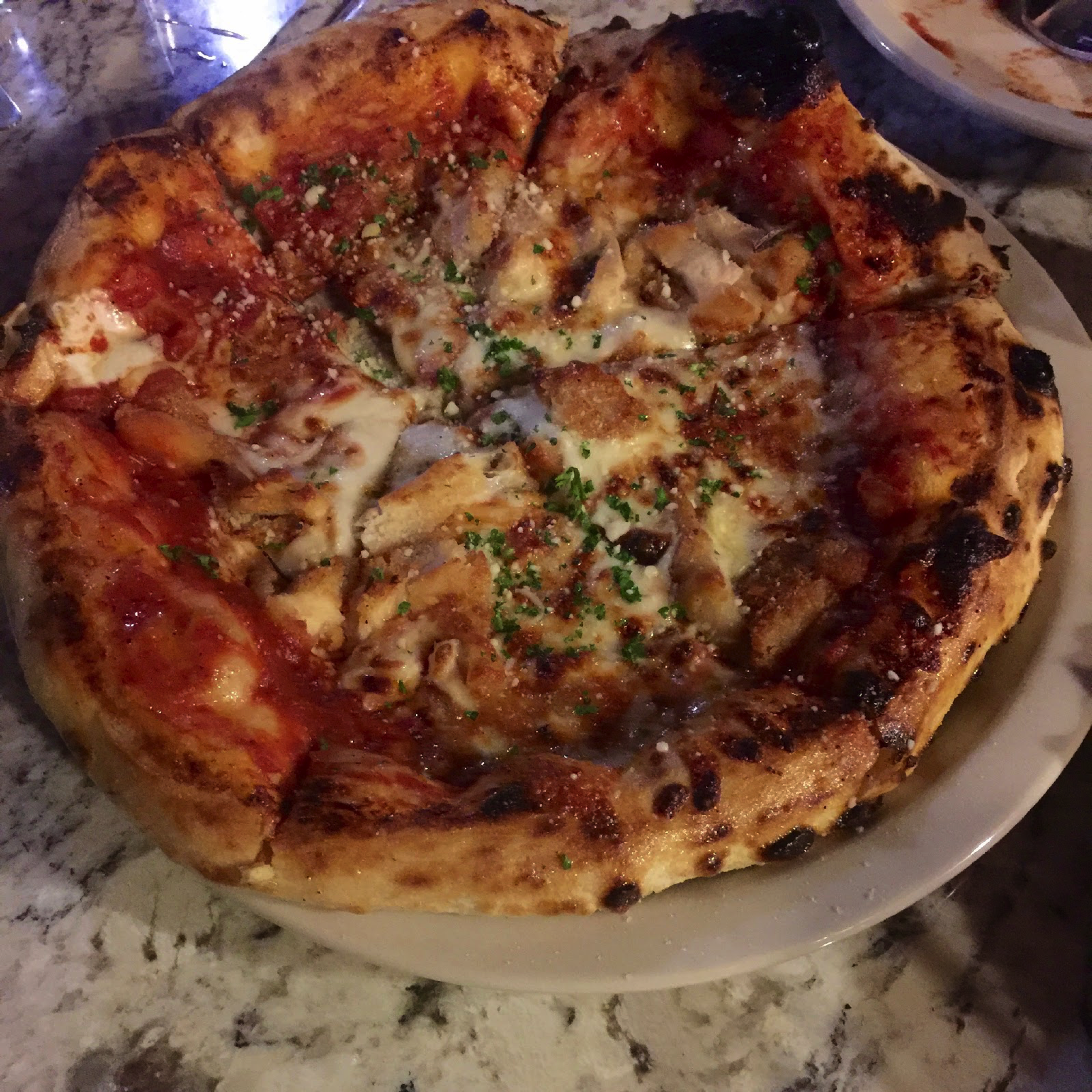 Alexis: Haha, wait, how did we describe it to the waitress? It had me cracking up.

Scott: I told her the contents settled during shipment. She giggled and walked away I think?

Alexis: Ha! Yes. I have a feeling she had no idea what we meant. But I’m glad she gave a courtesy giggle.

Scott: The signature sausage seemed pretty good. Not necessarily the pie, but the sausage itself. Humble Pie should focus on ground meats.

Alexis: So maybe we should go back for the burger…?

Scott: I don’t think I ever want to go back. The dining room was way too packed for me. I’ve seen Peter Pipers with more ambiance and less chaos than that dining area. The dining area reminded me of like how a sweatshop would be if everyone just took lunch back to their sweat stations.

Alexis: It was pretty cramped. Although the place cleared out pretty fast right after we got our pizzas. We should have asked to put them back in for another 2 minutes, when they weren’t so busy.

Scott: Not sure if 2 more minutes would’ve helped my charred-crust-undercooked chicken-parm. “Hi, can you put mine back in the oven upside down?”

Alexis: So, after admitting there was no saving these pizzas, and we had consumed enough to make our judgements, here’s how we scored them overall (out of a total of 5 possible slices):

Toppings: Cheese was pretty good, and had a nice amount of melty, stretchy, goodness.

Sauce: A little bland, and not notable.

Alexis: Am I  wrong on the sauce front?

Scott: No that seems right. It wasn’t bad, wasn’t great. I ended up drowning the last few slices under parmesan and crushed peppers. On the bright side, our drinks were always full, and kids eat free on Sunday and that’s probably the best move since otherwise Humble Pie is pricy for the quality.

And there you have it, our Humble Pie experience. Knowing that this is a chain out of Phoenix/Scottsdale, somewhat explains the mediocre, yet friendly visit we had. We also managed to turn the leftovers into a tasty breakfast the next morning. A couple minutes in a hot cast-iron pan, and the bottoms crisped up the way we wished they would have been from the start. Put an egg on it, and BOOM! Breakfast of champions.

Next week, we’ll be hitting up a one-of-a-kind, local spot. 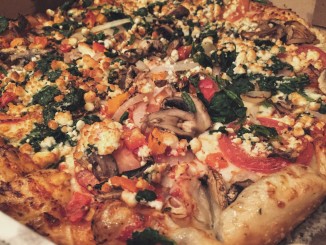 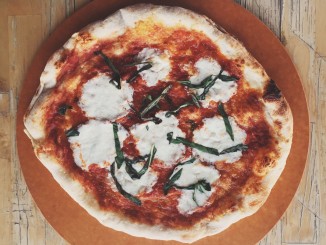